But Mom, I really need my phone in my bedroom

The Link Between Screens, Sleep Loss and Depression… and What Mom and Dad Can Actually Do about It 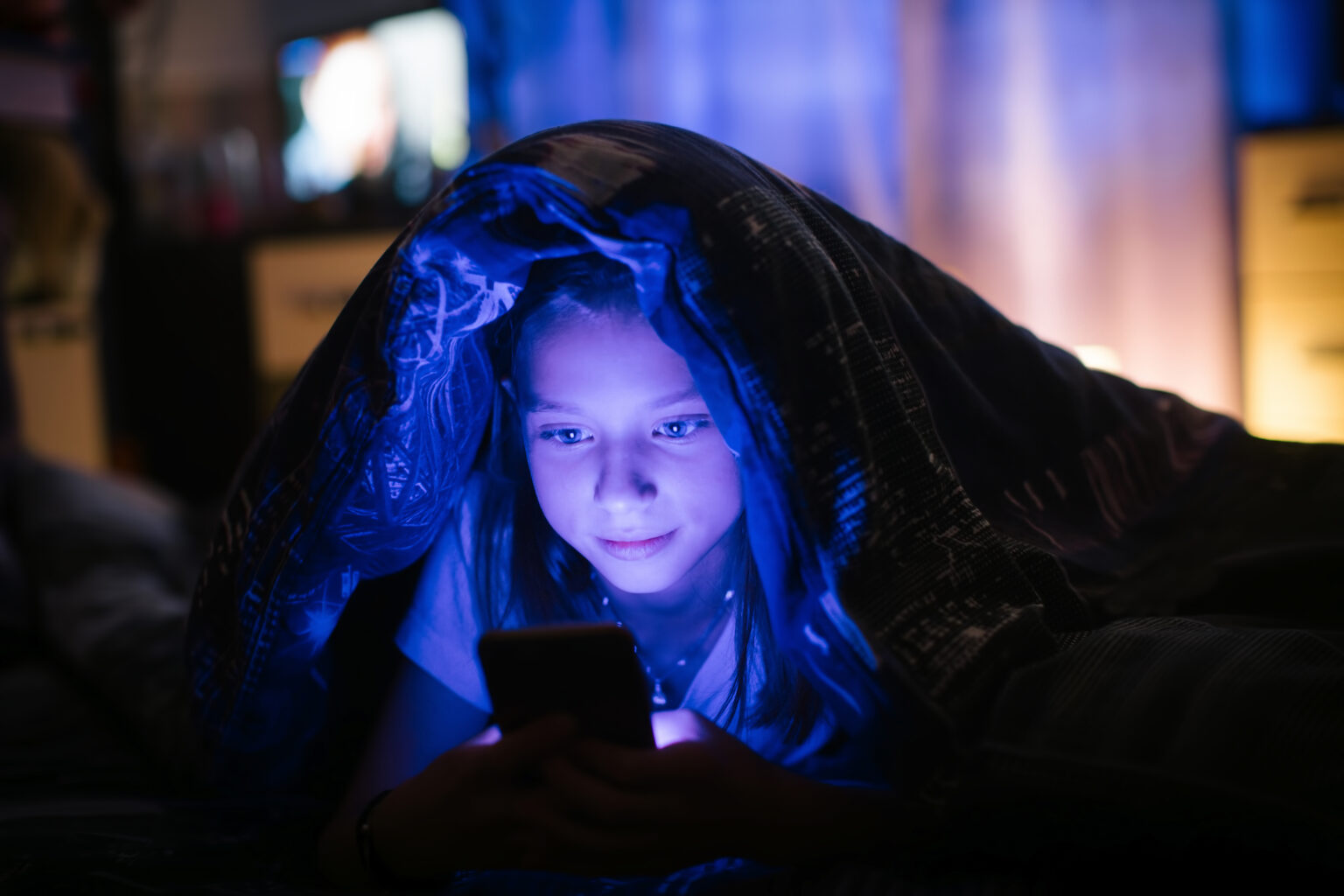 Pediatricians warn parents, “no screens in your kids’ bedrooms.”

Ever wonder how many moms and dads actually listen?

Common Sense Media answers that question in their brand new report, The New Normal: Parents, Teens, Screens, and Sleep in the United States. . .and the answer is only 20 percent. In fact, not only do 79 percent of teenagers actually take their devices with them to the bedroom each night, 68% of teens keep it within reach, and 29% actually sleep with their device in bed. (I’m selling my stock in teddy bears.)

“But I need it as an alarm clock!”

“Well, there’s another device that does that for you nicely. It’s called an alarm clock! They’re like $12 on Amazon.”

We live in a world where teen anxiety, depression and suicide are already at an unprecedented high and most experts point to the smartphone as a key contributing factor. So what additional risks are these 4 out of 5 teenagers exposing themselves to (no pun intended) when they bring their devices to the bedroom with them every night. . .and what can Mom and Dad actually do about it?

Let’s take a quick peek (or click on any of the over 20 articles and studies I link for even more on the subject).

Doctor’s Orders
The American Academy of Pediatrics were recommending parents remove TV and internet from the bedrooms long before young people had smartphones (back then kids just watched Jersey Shore, browsed MySpace, listened to The Black Eyed Peas, and texted their friends. . .on literally four different devices). Now that TV, social media, music and texting are all on just one device, your pediatrician’s advice has not changed. In fact, most doctors are even more concerned about this one device, the smartphone, a true swiss army knife of social media and entertainment.

Smartphones and bedrooms are not a good mix. The phone is a porthole with immense accessibility and minimal accountability. When you’re alone in your bedroom at 11PM—this is not the time to be engaged in interaction on social media, evading cyberbullying, and attempting to resist the temptation of pornography just a click away.

But all those distractions aside . . . smartphones in bedrooms affect sleep! And when sleep suffers, so do our kids.

So let me ask the question teens are wondering. Is there a chance alarmists are just making an issue out of something that is truly “no big deal”?

The answer to that question is an undisputable no. Our pediatricians actually know what they’re talking about. Our screens affect sleep big time, and the consequences of poor sleep are colossal and costly. Let’s start with how we know smartphones affect sleep.

Does it really affect me?
First, let me just quickly address the almost insignificant fact that the blue light emitted by our screens is known to hurt our body’s ability to sleep. Why is this insignificant? Because it’s an easy fix, and chances are your teens already know this and consider this no big deal because all they need to do is switch their phones to “night shift” or “night mode,” killing the blue light, which countless online sources explain how to do.

And they’d be right—the blue light is an easy fix. But even without the blue light, this addictive little device beckons us throughout the night. Dr. Jean Twenge has done extensive research in this area, trying to discover why adolescents today are sleeping less than older generations, and she firmly believes young people are trading their sleep for smartphone time.

The numbers support this. Despite doctors’ recommendations to avoid screen use an hour before bedtime and keep screens away from sleep areas, 79% of teenagers take their devices into their bedroom with them for the night, 70% use it within 30 minutes of going to sleep, and 36% wake up during the night to check their mobile device, most of them because they have received a notification or to check social media. The math gets pretty simple when you dive deeper into these studies. Those who spend more time on social media get less sleep.

Most of us don’t need to read a study to realize when you’re staying up late scrolling through Instagram, playing Fortnight or watching funny YouTube videos. . .you aren’t sleeping.

The research becomes really fascinating when you start digging into how attached we get to our phones and the actual separation anxiety we feel if we try to turn it off for the night. It probably explains why so many ignore their “doctor’s orders.” But even your therapist recommends, “leave phones outside the bedrooms before hitting the hay.”

“There are times and places where phones, in particular, but all digital platforms should not be there. The bedroom is the obvious one.”

So what happens when adolescents get less sleep?

When sleep suffers…
The consequences of poor sleep habits are numerous. Let me rattle off a few:

Poor school performance– yes, it’s almost as simple as that. Sleep less and get worse grades.

Drowsy driving– research reveals driving while tired is comparable to driving with a blood alcohol content of .08, the legal limit of intoxication.

Obesity– it was estimated that for each hour sleep lost, the odds of being obese increased in adolescents by 80%

Behavioral problems– almost every study on sleep connects poor sleep with negative behaviors. This ranges from being more vulnerable to drug and alcohol consumption or simply being impatient and grumpy. Have you ever noticed in your own relationships that you tend to be “short” with people when you’re tired?

But all these consequences aside… let’s look at the biggest consequence:

Poor mental health– a study out of the University of Texas’ Health Science Centre revealed teens are four times as likely to be depressed if they are sleep deprived.

Let’s dive a little deeper into the link between sleep and mental health.

Poor sleep and poor mental health
Sleep deprivation and depression have a curious connection. I say curious because their relationship is a two-way street. Those who are depressed definitely struggle with sleep; but those who struggle with sleep also have a much higher chance of becoming depressed. But don’t be tempted to turn this into a “chicken or egg” argument, because the research showing a cause-effect relationship from poor sleep to poor mental health is undeniable.

In a Harvard Medical article titled Sleep and Mental Health, experts conclude sleep deprivation can affect your mental health. A study they cite from a Michigan health maintenance organization found that those who reported a history of insomnia were, once again, four times as likely to develop major depression three years later. Harvard researchers conclude:

The brain basis of a mutual relationship between sleep and mental health is not yet completely understood. But neuroimaging and neurochemistry studies suggest that a good night’s sleep helps foster both mental and emotional resilience, while chronic sleep deprivation sets the stage for negative thinking and emotional vulnerability.

So how can we help our kids get a better night sleep?

Nighty Night
Sure, I could provide research about healthy eating, proper exercise, and avoiding caffeine. . . but honestly. . .that’s not what’s keeping most of our kids up. . .at least 79% of them. It’s their screens in their bedrooms at night.

So how should parents respond?

“Enjoy your phone during the day, but we charge it for you at night.”

This is a very simple rule to implement if your kids don’t have screens yet, but a very difficult one if they’ve become used to screens in their bedrooms already. But it’s what every expert recommends—don’t let the screens follow them to their sleep area. Tell them you’ll charge their phone for them.

“It’s a free service we provide as Mom and Dad. We insist!”

It will probably be about as easy as amputating their left arm, but worth it. The arm is gangrene. It’s got to go!

If you don’t want to physically take their phone away, at least use features like “Downtime” on an Apple device. Droid has it too. This feature turns off everything you choose at a certain time. You could make it so their phone basically becomes nothing but an old fashioned brick “cell phone” at 9PM every night.

And as an aside, if they don’t have a device yet, don’t rush it! Young people can’t even access most the social media they want until they’re 13-years-old. . .unless they lie about their age. So delay device ownership and social media until high school and save this battle until then.

But don’t just be a parole officer enforcing rules, “because I said so.” Get to the why. And that takes having some candid conversations.

You can lock up your kids’ phones every night and it might help them… for now. But how is that going to help them when they’re 18 and in a college dorm 1200 miles from you? Are they equipped to make these decisions on their own?

Engage your kids in meaningful conversations about why it’s important for them to be responsible with their favorite device. Share some of the research from this article. And if you don’t know where to take the conversation, open up a book like, The Teen’s Guide to Social Media & Mobile Devices, and discuss it with them. Like Chapter 11: Reevaluate Your Screen Time, or Chapter 20: Sleep Matters. Use the discussion questions at the end of the chapter to dialogue with them about the studies they just read.

Or. . .you could be like the other 79% of parents who just shrug their shoulders and assume that this is no big deal.

Maybe it’s time to have that conversation.

CLICK HERE FOR OUR NEWEST 12-MINUTE “PARENTING TIPS” PODCAST ON THIS SUBJECT!

OR FOR MORE ON HELPING TEENS BECOME WISE WITH THEIR SCREENS, TAKE A PEEK AT JONATHAN McKEE’S EXTREMELY HELPFUL BOOK, THE TEEN’S GUIDE TO SOCIAL MEDIA & MOBILE DEVICES

Jonathan McKee is the author of over 25 books including the brand new Parenting Generation Screen, and The Teen’s Guide to Social Media & Mobile Devices, and Amazon Best Seller, The Guy’s Guide to God, Girls and the Phone in Your Pocket. Jonathan is an expert on youth culture and speaks to parents and leaders worldwide.